What is the Big Board? 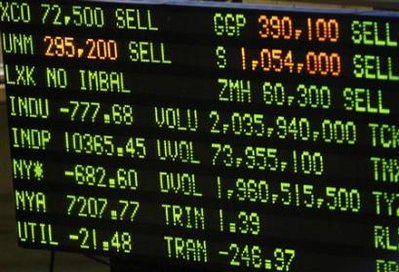 The name “Wall Street” conjures up images of stock brokers trading at a frenzied pace with ticker tapes flying through the air. The street itself is considered the heart of New York’s financial district. Within its eight blocks is the home to the world’s largest stock exchange company – The New York Stock Exchange (NYSE).

In 1792, a group of 24 stockbrokers signed an agreement that would establish rules for selling and buying bonds and stocks of companies. This agreement was known as the Buttonwood Agreement.  It was named for the tree by which they often met.  This pact laid the groundwork for financial history. On March 8, 1817, the signers of the Buttonwood Agreement drafted their first official constitution calling their organization The New York Stock and Exchange Board. It was in 1863 that the name was shortened to the New York Stock Exchange.

Also known as the “Big Board,” the NYSE was known for its floor traders. The NYSE, as Hollywood often depicted, used a high-volume, fast-paced outcry system as the way to trade their clients’ stocks. Today much of the trading is done electronically. However, the outcry system is still used by floor traders who are looking to set prices and deal in high-volume trading.

Until 2005, the NYSE was a privately owned company. Membership for floor trading was exclusive to just 1,366 seats which were extremely difficult to come by. Most were procured by natural attrition within a firm, but in some rags-to-riches Hollywood-esqe stories, hard-working clerks found their way to the floor.  Today, however, membership is open to the public and subject to a variety of application processes as well as fees, which are set forth by the NYSE Pricing Guide. Membership cost today is upwards of $1 million depending upon supply and demand.

Interested market participants can join the NYSE in one of three capacities:

Trading Floor Brokers: The trading floor brokers are positioned at the point of the sale, which as the name implies, is on the trading room floor. They work to execute trades throughout the day using electronic communications and the standard outcry system.

Traditionally, as a new member was inducted into the NYSE, he had the opportunity to sign “The Book,” which is a thick volume of signatures of all the members that have passed through the NYSE. It also included the original NYSE constitution that was signed in 1817. However, in 2006 when the NYSE went public, the book became obsolete as trading rights were no longer owned by its members.

But, in June 2011, the tradition returned. The fifth volume of “The Book” was introduced and new members who missed the opportunity to sign were asked to ceremoniously do so. In addition, eight of the longest standing members of the NYSE were asked to sign the new book.

Successful trading on the NYSE is not only attributed to the savvy of the traders, but also in the success of the businesses listed. Today, the NYSE lists approximately 2,800 companies whose global market capitalization is around $18 trillion. To be listed on the NYSE, a company must meet minimum requirements which include:

Today, the NYSE is under the umbrella of parent company NYSE Euronext and together with the NYSE Amex, NYSE Alternext and NYSE Arca, represent one-third of the world’s equities trading and the most liquidity of any global exchange group.

The NYSE has seen many changes over the years from how stocks are traded to who is trading them, its physical location and several major mergers, but one thing is certain: It is a defining market in the world’s economy and it is an iconic symbol of the country’s economic condition. Its history is not only solidified in its traditions throughout the financial industry, but thanks to Hollywood, throughout the world as well.